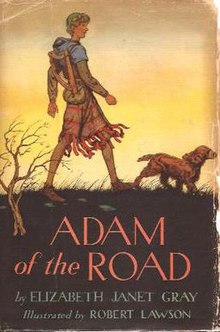 Adam of the Road by Elizabeth Janet Gray

Adam of the Road by Elizabeth Janet Gray in a Newbery Award winner for 1943.  Here we meet Adam, a boy of 11 who is a minstrel’s son in the thirteenth century in England. When we meet Adam, he is staying at a monastery while awaiting his father, Roger, to pick him up after Roger travels to France for his job. Here, Adam has a dog named Nick to accompany him.

Roger returns and Adam and Roger embark together on the road since minstrel’s had to travel to earn a living. Along this road, Adam’s dog, Nick, is stolen by another minstrel who feels he’s been cheated of his horse by Roger. Now, both Adam and Roger are on the trail of the other minstrel to get Nick back.

Along this trail, Adam loses Roger when he goes chasing after Nick in…